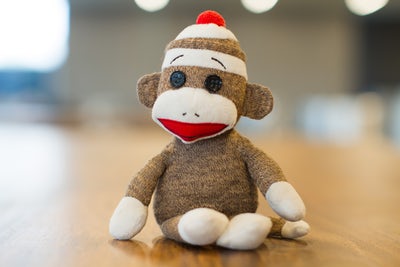 Above is a photos of Kumo, when he was new.  Now, I’m afraid, he doesn’t look quite the same.  Sasha the cat chews on poor Kumo constantly and he is pretty sad looking now.  Sasha tends to be a bit of an antagonist in my newest book, Shattered Dreams, still under construction.  She loves the kids and their mother, but poor Josh is constantly under attack.  She chews and drools on the poor monkey until he is sopping wet, then hides him in Josh’s favorite chair, or under his pillow.

Of course, Sasha isn’t the main antagonist, only a side track.  As the SAC (Special Agent in Charge) of an FBI satellite office just outside Washington D. C. Josh has his hands full.  Three murders, seemingly unrelated, have caught his eye, and although no one else thinks there’s a connection, Josh is sure there is.  Even Charlie, who always backs him up, thinks he’s crazy this time.

You may remember Dodge Brewster from my first book, Fire Light Fire Bright.  He  and Josh went through their training at Quantico together,  even worked out of the same FBI office for a couple of years until Dodge resigned from the FBI and went home to Glenwood and was elected Sheriff.   He and Anton, a new deputy come to D. C. on business, and naturally look Josh up while there.  This brings still another murderer onto the scene.

Have I got you thoroughly confused?  I hope so, as that was my intention.  Now you’ll have to wait until the book is finished to see what happens to Kumo, Sasha, Josh, Dodge and Anton, plus their friends and families.

Don’t forget, FIRE LIGHT FIRE BRIGHT, DREAMS NEVER LIE and DREAMS ARE FOREVER are still available for purchase through Amazon or direct from my publisher, TGIM Digital Publishing.  SHATTERED DREAMS is still mostly in my head, but I’m getting it on paper just as fast as I can.

P. S.  My “name the pets” game was successful.  I had many entries to chose from.  Sasha came from Stephanie M. and Kumo from Bryan D.  Bryan submitted the name Kumo for the cat, but I thought it fit the monkey much better.  Thanks to all who gave suggestions.

I was born and raised in Brooksville, Florida a small town about 15 miles inland from the Gulf of Mexico. I moved to Texas with my three children in the early 1980’s and I met my husband Ronnie on a blind date. We live in a very small town in north central Texas and I still work full time as an insurance agent. I am also hard at work on my next novel. I love the north-central Texas area as is evident in my books. View all posts by Elsie Varn Harrell