Shattered Dreams is the third novel in the Dreams Never Lie series.  If you’ve read Dreams Never Lie and Dreams Are Forever, then you are already familiar with how talented Josh Howard is, why he is SAC of an FBI branch office in D. C. at his young age.

Shattered Dreams starts off with an advertising executive being murdered and found in a hotel room in New York City.  Then in Washington state, we find an attorney murdered and buried in the snow, halfway up a mountain.  Finally, a Miami Dolphin wide receiver is found in a canal, in Fort Lauderdale.  He’d been shot, but the alligators were about to finish him off when he is found.

Three separate killings, months apart, in opposite corners of the continental United States.  Who would ever think to connect them, well, except Josh, that is.  His boss, Phillip, after reviewing the evidence in each case, tells him to forget it, or work on it in his spare time.  There’s nothing to connect them.  Even Charlie, who always agrees with Josh, doesn’t see it.

I’ve sure gotten Josh into a mess with this one, and right now, I’m not sure how I’m going to pull him out.  Keep watching this website for more updates, as I try to figure out where this story is going. 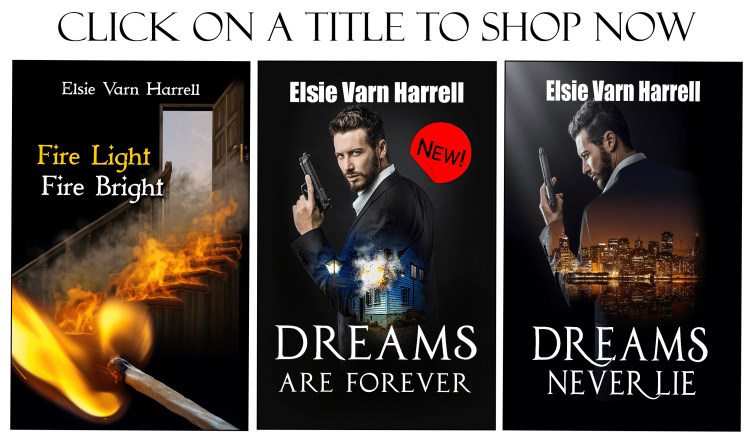 When Elsie decided to try her hand at writing a novel, Fire Light Fire Bright was born followed by Dreams Never Lie -which quickly became her publisher’s first Best-Selling Series. The Color of Thunder was published right between Dreams are Forever and Shattered Dreams. Elsie was born in Brooksville, Florida. Some of her fondest memories were swimming at Pine Island in the nearby Gulf of Mexico. Weeki Wachee Springs is where she learned to swim. In the early 1980’s, Elsie and her three children, Katie, Lisa G. and Jes moved to Texas. Shortly after moving to North Central Texas, Elsie met her husband Ronnie on a blind date and after a whirlwind courtship, they married in April 1987. After 34 years, they're still going strong. View more posts